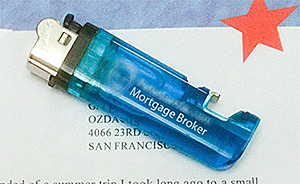 Last week I opened a letter from a business acquaintance who has put me on his mailing list. The envelope had a lump in it, and I expected a pen to fall out.

This mortgage broker sent through the mail a cigarette lighter with his logo and business name on it.

I didn’t think of “Oh boy! What a great guy to send me a lighter for my cigarettes.” I thought, “Isn’t it illegal to send flammable material through the mail? How can I get rid of this without starting a fire? Does he think I smoke? Who uses lighters?”… and on and on and on.

In fact, I am still angry at having something vaguely dangerous and completely useless to me come through my mail slot. 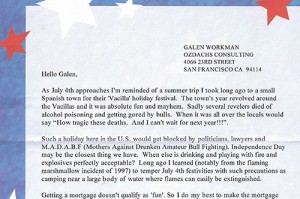 The copy in his letter was strained, too.

He started off talking about a Spanish town where people die of alcohol poisoning and getting gored by bulls. The letter laments that such civic celebration would not be allowed in the US because of prudish politicians, lawyers, and <giggle> “Mothers Against Amateur Drunken Bullfighting”  .

And, the connection with the enclosed lighter? (Well, if you follow the narrative, the closest thing in the US to having people die in drunken bull fights is Fourth of July fireworks. And, fireworks need to be lit.  And, he’s giving you something to “… to crack open a beer and set something on fire for the 4th of July“.)

My mind struggled to make this letter a rational business tool.

On the plus side, it did get noticed.

Seriously?  This gift and the stories in the mailing are supposed to make me trust this man with my financial arrangements for a new home?

What makes the scenario worse is that I know that before resuming his mortgage brokering, this man sold insurance for a couple of years.  In my mind I can see his lighter burning down a house which was insured by a policy he wrote.  And, have no fear, as a mortgage broker this Reconnaissance man can now help you finance a new, unburned home.

Ranting aside, the letter and “gift” are great examples of what not to do:

I am still shaking my head over this mailing.  Have you ever received anything worse?