This month I received a phone call from an automobile repair shop owner whose business is taking a beating because of its bad showing on Yelp.  There are 7 reviews for his shop online, and 6 of them gave the service 1 star.

The owner told me that awhile ago he was approached by Yelp to buy ads on the site.  At that time he had a lot of positive reviews.  He said that after he declined to advertize, he noticed that his positive reviews started disappearing from the site.  They were being removed by Yelp’s filter.

Yelp lets you see the reviews it has removed from active rankings.  When I checked, the repair place had 22 filtered reviews, and those had an average rating of 4.22 stars. 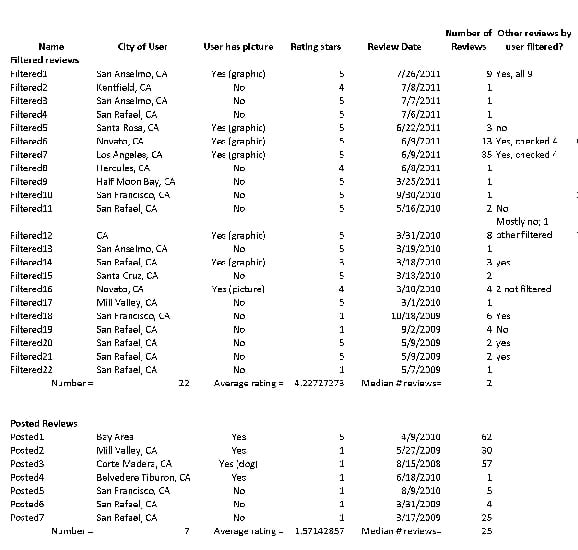 I dug around some to see if I could quickly discover a reason — either benign or evil — for Yelp’s filtering.  I couldn’t.  Maybe you can discover a pattern or suggest more review characteristics to check. (Click on the table above to download a PDF of my research.)

I noticed that many of the five-star reviews might be suspicious because they’re from people without profile photographs and from people who had written one review on Yelp, the filtered one for the auto shop.

Many of the filtered reviews were from reviewers whose other reviews are also being filtered by Yelp.  I checked their profiles and clicked on the links to their reviews to see if those reviews showed up.  It looked like that Yelp — for some reason — distrusted everything that these people wrote.

On the other hand, some of the filtered reviews came from people whose comments on other businesses are being displayed, and one of the visible one-star reviews was written by a person without a profile photo who had only reviewed this business.

In addition, when I read the positive reviews, there was no obvious pattern in what was said or the length of the review.  None of the 5-star raves sounded fake to my human ear.

So, why has Yelp decided to show 7 reviews averaging 1.57 stars instead of displaying all 29 with an average of 3.58 stars?  Is it revenge against a non-advertiser?

Yelp is deliberately unhelpful.  They say:

We intentionally make the filter difficult to reverse engineer — otherwise, we would be overrun by reviews written by people hoping to game the system. So while it may be tough to decipher how the filter works, the rules are actually the same for every business and every review.

I understand why Yelp wants to show only real-person penned, non-financially-motivated reviews.  We all want to know that the rave we are reading is an honest report from a customer and that it was not written by friends, relatives, or the owner himself.

Still, Yelp’s software seems — at best — arbitrary.  Its decisions don’t conform to obvious logic, and many — if not most or ALL — of the filtered reviews sure sound like they’re legitimate.

Worse, there is no obvious way to contact Yelp for support.  I could not locate  a  phone number to call or appeal process for the business owner to follow.  So, the business owner has to live with a rant-filled 1.5 online profile that kills his business.

I’ve heard Len Tillum, a lawyer with a radio show on KGO, tell anguished business owners that there’s nothing they can do legally about perceived unfair filtering on Yelp.  He’s said that a web site owner, like Yelp, can decide what content they want on their site for whatever reason.

However, for those of us to rely on Yelp and Yelp ourselves, more transparency would be appreciated.  I want to know that the 1-star business is truly a place I should avoid and not that its owner just decided he couldn’t afford to advertize at Yelp.

Do you see a pattern in the filtering that I’ve missed?  Let me know your insights by posting here or email me (if you email, please answer the spam challenge!).