Get 25% off Anti-Virus or Security Suite Software

Get 25% off Anti-Virus or Security Suite Software

I received email today announcing a 25% sale for two-year licenses of the security software that I use on all my machines. I don’t see a time limit on the sale, but I thought I’d pass it along today. The email says the lower rate is in celebration of the release of a new version of their products… whatever! I like the product and a sale price is something to celebrate.

I have used ESET’s software for several years.  I like it because it doesn’t slow down my computer when it scans for problems.  You may notice some slowness on older or less beefy computers when it’s running a scan, but in my experience ESET is much less of a computer hog than Norton, McAfee, or the other better-known programs.  ESET also rates well in tests by independent labs for actually doing its job and stopping attacks on your system.

I use SMART SECURITY which includes the NOD32 antivirus programs and adds a firewall and other features like an anti-theft module that locates your stolen laptop and locks down the files on it via the web.

Yes, although ESET updates its list of known viruses several times a day, I have been bad in updating the program itself.  I was a couple releases behind and have been missing out on some of the newer features that are now included with NOD32 or SMART SECURITY.  I didn’t know about the anti-theft feature, so I paid for that separately by buying LoJack for laptops. Stupid! And, I didn’t know that the anti-virus program will also scan my Facebook and Twitter feeds to make sure I (or someone else) hasn’t posted a malicious link in my feeds.  You know, a link to a phony status line that takes you to a spammy site that tries to get you to download something evil to your PC. The current versions of NOD32 and SMART SECURITY run through your social media streams and makes sure that there’s nothing dangerous on your steam.

I also like the summary they give of the information I share with the public on the two social media sites. 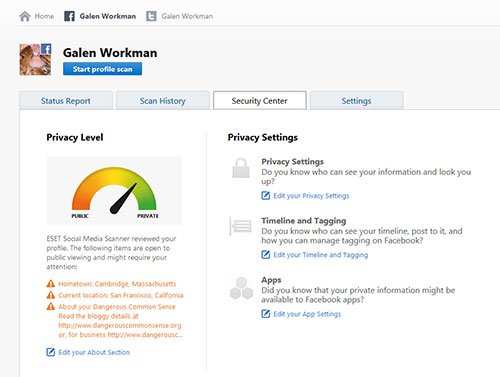 Finally, unlike security software programs I have seen on other people’s computers, ESET’s suite doesn’t give me a stream of alarmist warnings about what what I should be doing.  So, I chose to run the check on my Facebook account, I didn’t get a warning message that my Facebook feed was unprotected.  This is a big deal, in my opinion.  I have watched friends ignore important warnings from Norton et al. When I asked why they didn’t react to the message, I have been told that the program is always sending them messsages that aren’t important so they don’t read anything it pops up.  A security program that cries “Wolf!” is a bad watchdog.

Enough of mixing metaphores. If you’re tired of Norton, McAfee, or whomever slowing down your system or annoying you with endless off-target warnings, check out the lighter touch of ESET.  Scroll down the page to see a comparison list of features to see if you want NOD32 or SMART SECURITY.