Can I Use that Picture? 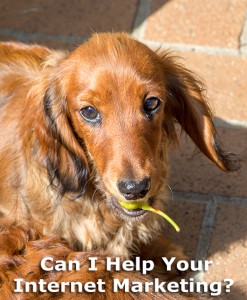 Puppy “Zenith” Can Help with Your Marketing

Good looking pictures make all the difference in your website, social media posts, and printed marketing materials.  Previous blog posts have talked about how sex sells and told you to load up on photographs of pretty women, babies, and pets.

But, you can’t just grab a photo of a Golden Globe winning actor from another web site and stick it on one of your pages as if the star was a raving fan of your business.

I am not a lawyer, so if you want specific legal advice, contact an attorney.  However, let me tell you the rules I follow when I create web pages and social media for my clients.

The rules as I understand them — see non-lawyer caveat above! — are pretty simple.  Use pictures you’ve taken or ones you have permission to use.  If you’re using the photo for a non-editorial purpose and a person is identifiable in a picture, get a model release from that person.

You cannot use any picture or graphic you find in a Google search, on Flickr, or anywhere else on the Internet, unless the photo is marked in some way that gives you explicit permission to use it. Flickr and possibly other photo sites encourage people to give permission to others to copy their works using Creative Commons licenses. But, most images are not tagged with permission, and by default a photograph is protected by copyright law and copying is not allowed.

Pictures that grab the attention of your potential clients are powerful components of your Internet marketing effort. If you have the pictures you want for your Internet campaign, great!  Use them! If you’re looking for more photographs, I take some darn good photographs (see examples — especially the puppy pictures).  I am happy to come over with my camera and take the pictures you want. Or, browse stock photos available for licensing on the service I like best, Dreamstime.

Just make sure you get pictures of puppy Zenith or something equally appealing on your Internet marketing materials now! 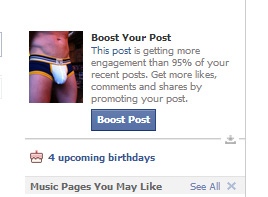 I was somewhat startled when I went to Facebook to catch up with news and encountered a provocative photograph in the sidebar.

Facebook taunted me that the post they were displaying received 95% more “engagement” than the my own recent pitiful posts.  They suggested that the remedy to my isolation was to Boost Post — to pay them to display my posts in more places more frequently. 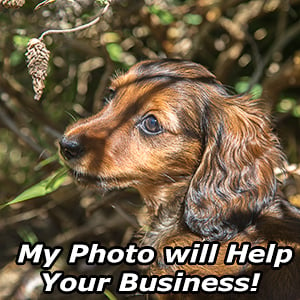 Well, okay.  Maybe paying Facebook to display my posts as “sponsored” in the newsfeeds of people I don’t know would get some new people to read the Ozdachs page, like it, and buy our services.  Maybe.

But, what I really took away from Facebook’s recommendations was a reminder that sex sells.  The post that received 95% more attention was a crotch shot posted by a bar whose business page I had set up.  The client is now publishing his own posts, and I confess that I admire his talent for grabbing eye balls and getting people to LIKE the photo or click through for more information on the featured event.  He used a classic marketing technique: he used sex to get attention for his business.

I suggest to clients that we illustrate their pages/posts/hard-copy material with photographs of babies, puppies, and pretty young women.  Research shows that images of those subjects gets readers to pause and pay attention to the material.  It turns out that pictures of kittens and well-endowed young men are equally effective.

My own preference is to get users to stop and click by using pictures of adorable dogs.  They can be used in any forum, and puppies don’t risk offending the sensibilities of more traditional or conservative viewers.  Maybe the impulse to pet a dachshund isn’t as strong as the sex drive, but in my opinion a puppy is a more appropriate graphic for a business-to-business focus.

Of course, if you are attracting customers to your bar, you might focus more on sexy photographs.  Or, if you’re selling estate planning, you would be smart to load up your site with smiling babies of the inheriting generation.

In business, your task is to create an appealing image that will stand out from the crowd of messages hitting your prospective client.  Pretty women, babies, and puppies stop people from paging down or tossing your flier away without a second glace.  Give your message a chance to reach a customer.

Do what Facebook does. Let sex sell for your business!

What “Non-Professional” Photographs Can Do For Your Site

You don’t need professional formal photographs on your website. You know the type of picture I’m talking about:  the perfectly focused, perfectly lit staged shots that show off the military crease in the pants a model is wearing or depict a manicured office waiting for clients.

That type of professional picture has its place, and a couple of my clients use professional-photographer-created images very effectively.  But, clients on a budget that doesn’t include a photo session don’t need to worry that their site is going to suffer.

Photographs on your web pages should be engaging and tell a story.  That doesn’t mean that they have to be picture perfect.  Use the tricks of professional marketers and emphasize pretty women, cute kids, and adorable puppies if you want to amp up the effectiveness of your informal photos. 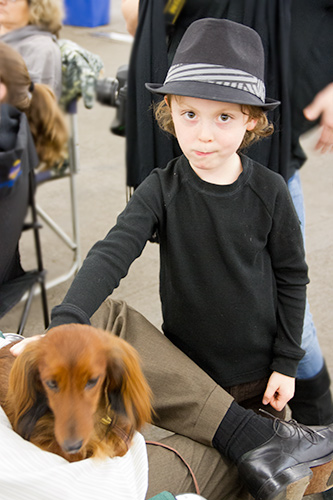 One of Sequel's People

For example, I love this picture taken of one our dog Sequel’s fans at this year at the Cow Palace show. The focus isn’t sharp and there’s too much going on the background.  But, I’d use it in a heartbeat to help tell the story of the crowd-pleasing day at a  dog show. (See more pics in Sequel’s People gallery online.)

San Francisco pro photographer, John Ater, has a two-sided business card.  One side displays a studio shot he spent all day perfecting for a major retailer’s billboard campaign.  The other side is an iPhone picture of people on a bus.  The home page of his website displays an informal shot of kids on the street.  His point is that many types of photographs can be compelling and technical perfection is rarely required.

Mark Rogers is a professional photographer who specializes in non-posed shots.  His forte is pets, but he shoots for businesses and even weddings.  It’s just that when Mark hires on as the wedding photographer, he’s clear that his love is for informal action shots and there are only so many staged “mother-in-law of the bride” wedding party photos he can handle.  He does great work capturing the personality of his subjects and feel of an event.

And, a feel for your business is exactly what you want to show on your web pages.

The best professional photographers — the ones whose work I like best — tell a visual story.  Their equipment, experience, and artistic skill give them an advantage, but the magic is in capturing of the moment, the composition of the scene.

So, take out your point-and-shoot camera or phone, and see what you can do for your website. Perhaps pictures you already have can work for your business!  (My favorite client photographer is estate planning attorney Julia Wald.  Every month she uses her vacation or around town shots for her newsletter.  Check out how she tied the idea of leaving a legacy through estate planning to her trip to Egypt and the legacy of the pyramids — lots of her clients write in with praise!)

Sure, if you’re busy or don’t have a feel for appropriate shots,  you can engage a professional photographer or even your webmaster to take some pictures for you.  But, you need to explain to them the story you want to tell. Talk about out what views, places, or events will tell your business’ story.  Experiment.  Have fun.  And, let me know what happens!

I have been using Flickr for posting photographs online for several years. It’s been a great place to upload photographs for my church’s electronic newsletter, and it’s been a handy place to share dog pictures and other personal visual memories.

I kept my Flickr account even after I stared using Facebook which comes with free photo galleries. The image quality on Flickr is an order of magnitude better than the fuzzed-up, blurry mash that Facebook offers on its photo galleries. Plus, the general public — not just your friends — can wander by your Flickr sets and find photos of things they’re looking for. I’ve enjoyed getting comments from strangers.

But, Flickr washes out and changes the color in some photographs I upload. I notice this fault more on images I have previously manipulated in Photoshop. It’s as if Flickr figures out that I have edited the photo and then tries to do more automatically of whatever editing I had done myself. This pale, over-whiteness of images is particularly annoying when I look at a slide show of my pictures.

This morning I uploaded a set of photographs of a friend’s birthday party to Flickr. Some of the photographs were noticeably bluer/whiter/lighter than they appeared in Photoshop on the same computer monitor. I went back and color-manipulated four images to increase the warmth of the light, and uploaded replacements, trying to make the people less glaringly Caucasian corpse-like. The results were better, but still there’s a sickly paleness on a lot of the faces.

On a whim, I decided to open a trial account on SmugMug. That’s a service which is used a lot by professional photographers — I set up a client with a site there just last month.

Damn! I notice a difference! The photographs on SmugMug are more appropriately vibrant and with the same tone I see in Photoshop. The clarity of the down-sized thumbnails are good, too.

Can you see the same difference? Check out the two slide shows. I suggest making them both full screen to see as much of each photograph as possible. (Remember, these are personal, non-professional photographs. Some are blurry and some show residue of the camera’s flash. That’s how they came out of the camera, and those faults are mine and not either Flickr’s or SmugMug’s.)

SmugMug has other advantages over Flickr. It offers a nicer layout of its photographs, and each set of photographs can be laid out in a different format with a different background. Plus, switching to the next photograph in an album is instantaneous on SmugMug but takes time on Flickr.

Of course, Flickr is significantly less expensive than SmugMug. Flickr is $25/year for a “pro” account while the comparable service from SmugMug is $40/year. My trial SmugMug account uses some customizations and strips out the SmugMug logo from my galleries, and this level subscription is $60/year.

Is the better photo image quality, flexibility in gallery settings, and overall professional feel worth $60 a year to me for my personal photographs. I think so. But, I have 13 more days to make that decision for sure.