A Shout Out for a Year-End Photography Workshop Deal

A Shout Out for a Year-End Photography Workshop Deal 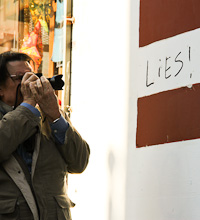 Earlier this month I had an awful lot of fun being educated in the basics of taking pictures by professional San Francisco photographer John Ater. I had bought a Groupon for a three-hour workshop which was limited to 10 people, and right before its expiration I signed up for a Saturday Chinatown group shoot.

Ten of us showed up at Portsmouth Square for a talk, a walk, and shutter-snapping practice.  The workshop was set up to let us experience looking at the streets with the eyes of a photographer. The day was a satisfying mixture of professorial tips, individual hints, and photographic assignments… all strung together in a very informal, non-stop four-hours that covered about four blocks of territory.

John doesn’t teach how to use your camera and its features.   In fact, nearly all the class shots were taken on the cameras’ automatic settings.  Rather, John leads you to explore framing what you see, leaving spaces, and looking up and down and all around.

Most of the students showed up with digital SLRs, but John is no equipment snob.  One of his first commentaries is about his two-sided business card.  One side features a model in a department store photo shoot.  The other is an iPhone-snapped gritty city picture of people on a bus.  (Guess which one I felt was more compelling.)

John advertises the workshop as a three-hour experience.  Ours lasted over four, if you count the 30 minutes or so we gathered in a tea house and swapped photographs and commented on each others work.  That unwinding show-and-tell finale made me want to keep snapping and figuring out how to play with the images I saw.

John is offering a better-than-Groupon deal if you purchase a workshop directly from him before December 31st.  You can buy an unlimited number of workshops for just $60 each.  My Groupon was a half-price $75 and the experience would be worth the full rate of $150. I think this direct deal is a good buy.  I am happy to report that I received a certificate for another workshop as a Christmas gift!

So, if your shopping for yourself, your professional life, or for a friend, I recommend John’s photography workshop deal.